Stop Fantasizing about your Dream Team and get to work!

I’m continually amazed how often I come across underperforming organizations that don’t try to improve because they feel the caliber of their employees is inadequate to achieve higher performance. It may well be true that your team is suboptimal in its makeup but that’s no excuse for failing to optimize the team you have. Donald Rumsfield once said “You go to war with the army you have, not the army you might want or wish to have at a later time.” In this case what’s true in War is true in business: Unless you are the sole proprietor with an unlimited bankroll, you have to accomplish the tasks in front of you with the team you have.

In many cases it’s unfair to label the employees as under-performers because they haven’t actually been given the opportunity to perform. A workplace without a formal system of standardized work is chaos and what emerges from that chaos is leadership by fiat: the loudest and brashest control the process. What I am trying to get across here is that if you don’t set the standard, the loudest and brashest of your employees will set the standard themselves. The standard that they set will be created based on their motivations, not yours! What are their motivations? Minimizing their workload? Transferring responsibility to others? Whatever they are, you can rest assured that unless your employees are of impeccable character, they aren’t going to be the same standards that the business manager or owner would set. Further complicating matters, without a formal standard, each individual employee is going to set their own individual standard. What you’ll have is system of work made of multiple competing standards.

While Mr. Friedman is talking about politicians, the same concept is very true about motivating employees to “do the right thing.”  With apologies to Milton, let me rewrite that for our purposes:

Deming, the founder of modern process improvement always said that “A bad system will defeat a good person every time” and he’s absolutely right. Without a formal standard your best employees will be driven to lower performance so they don’t “make waves” or alienate their coworkers. Any workplace is a mix of employees of various performance levels. The purpose of standardization is to optimize the performance of the employees you do have. Let’s look at this quick chart: 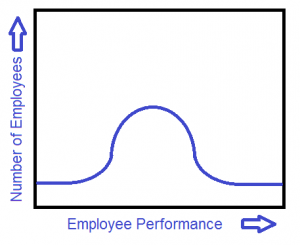 The solution is simple: Standardize the work to improve the performance. Then enforce the standard and involve the employees in continuous improvement to lock in and improve that performance.