SOP Development Tip – Leave the Multitasking to the Computers 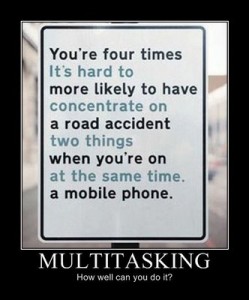 As any parent can attest, it’s possible (though hardly optimal) to do two things at once – as long as none of the tasks you are performing require much thought. You’ve probably noticed that when you multi-task it’s very easy to commit errors. Some studies have found that drivers who talked on their cell phone were more likely to crash than those who were intoxicated.

There is a reason for this – Our brains prefer to swap between the two tasks to think about them separately. Because of this trying to do two things at once is rarely as effective as doing them one after another. Here’s a quick experiment you can perform to see what I am talking about:

Time yourself doing the following activities.

1) Print your full name while spelling “Ammonia Refrigeration” out loud at the same time.

2) Print your full name then spell “Ammonia Refrigeration” out loud.

I get about 15 seconds doing it the first way and about 6 seconds doing it the second way. It’s not hard to walk and chew gum at the same time because neither one of them take much mental bandwidth. Ever try and perform arithmetic while carrying on a conversation? It does NOT work out well for most people! So, why does any of this matter? What we try to do with a properly written SOP is to standardize the process so the operator can freely think if something out of the ordinary happens.

Bill Marriott perhaps said it best: “Standard processes and methods are NOT about creating mindless conformity. Standard methods are all about eliminating the constant hum of the hundreds of decisions that would take place all day so you can have the mental bandwidth left to focus on the few major problems that pop up.”

There is a danger however in standard processes that following them routinely over and over again tends to put your brain in idle while performing the task. Here’s one tip I use to try and keep the operator thinking while performing a standard task. Look at the following step from an operating procedure below:

Pretty bland right? I train operators to read the complete step before they perform it. Many times I’ll include explanatory text in italics as well. Let’s dress that step up to inform the operator and keep them engaged in the procedure they are performing it:

That works out much better for nearly all the operators I’ve worked with. The operator is engaged directly in the procedure and thinking about the ramifications of the step they are performing – the actual valve closing doesn’t take much mental bandwidth.

So here are my two tips for you on SOP development and Multi-tasking:

1) Where possible, always write your SOP steps so they avoid concurrent tasks and perform tasks in series.

2) Write your steps so they keep the person performing them engaged in the task and the procedure itself.

If you have any thoughts, I’d love to hear them in the comments or through email.