The Failure of Lean/Six Sigma

I’ve been asked in a few emails to comment on how to apply Lean/Six Sigma to ammonia refrigeration and PSM programs.

The long answer follows but feel free to skip this once your eyes glaze over!

I gravitated out of Lean/Six Sigma work because I just don’t feel (as it is usually applied) it yields anything but pretty charts.

You see failed implementations everywhere you look and most businesses that attempt to utilize Lean/Six Sigma fail to see significant or lasting positive results. How bad is it really? How about up to a 98% failure rate for lean implementation? Would you take those odds on any other part of your business? When it works, it works gloriously – and that’s the results we get excited about and try to achieve. In a sense it’s the same reason people play the lottery.

It doesn’t have to be that way though. In my view we can remove the “chance” element from the equation if we remove the single reason most Lean/Six Sigma implementations fail: you can’t improve a process when you don’t have a reliable standard.They don’t fail because they aren’t exerting great effort, or because they are not using the tools properly – they fail because they are trying to use process improvement tools on a process that has not yet been standardized. You would be amazed at how many businesses can’t even explain their own process! W.E. Deming was on to something when he said “If you can’t explain what you are doing as a process, you don’t know what you are doing”

Almost everyone attempts to improve their process before they do the difficult work of standardizing that process. Imagine there is a short order cook trying to make scrambled eggs and you are asked by their supervisor to figure out how long to cook the eggs for optimum flavor.  Here’s what you’re likely to find:

When that is the process you are using to make scrambled eggs you don’t get a lot of payback from focusing on how long you cook the eggs! There are too many variables outside of your control and until you control those variables you are going to have unreliable results. Furthermore, your end goal is “optimum flavor” – a subjective standard. Sure, you can turn “optimum flavor” into an objective standard but you can only do that by agreeing on a standard.

Sadly, this really is how most companies attempt to utilize lean and six sigma!

Please don’t misunderstand me – I think Kaizen, Lean and Six Sigma are great TOOLS to 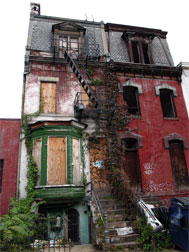 utilize on a standardized process. Think of Lean/Six Sigma as “finish work.” They are the polish you put on a newly painted car or the quality paint you put on your newly finished house. But if your house looks like the picture on the right, the quality of your paint is not the biggest problem you’ll be dealing with.

I would argue that painting that structure (applying Lean/Six Sigma) actually hurts the house because the money, time and effort you used for paint should have been utilized elsewhere.

Standardization is the first step on process excellence. It’s the most important step. It’s also the hardest step and that’s why it’s usually glossed over. Once you’ve standardized your process then you can use Kaizen and some other minimal Lean implementations to improve your process. No matter how hard you work at it though, if you skip standardization, you’ll never reap the rewards of any process improvement program.