OSHA’s General Duty clause is located in the Occupation Safety & Health Act which we reference as 29 USC§654 at section 5(a)(1).

29 USC§654.5(a)(1) Each employer shall furnish to each of his employees employment and a place of employment which are free from recognized hazards that are causing or are likely to cause death or serious physical harm to his employees

OSHA states “Employers can be cited for violating the General Duty Clause if there is a recognized hazard and they do not take reasonable steps to prevent or abate the hazard.”

The ability for OSHA to issue a General Duty Citation is not unlimited; they must meet each of the following conditions:

Let’s see how this works in practice, shall we? What follows is an actual 5(a)(1) worksheet from a citation issued to a dairy that used Ammonia as a refrigerant but was not required to implement PSM:

Nature of Hazard: The employer owns and operates an ammonia refrigeration system at its dairy facility in (REDACTED).  The employer has not inspected or replaced the safety relief valves on the refrigeration system within the last 5 years.  These valves are critical to the safe operation of the ammonia refrigeration system. Without appropriate relief, the ammonia storage vessel and other vessels in the process could become over-pressurized and explode.  The explosion could hurt someone with debris and would result in a subsequent release of anhydrous ammonia, which is highly toxic in large doses. The acute exposures could cause severe chemical burns, severe respiratory distress, and death.  The employer recently had an accident when the condenser vessel on the boiler became over-pressurized due to ice build-up on the vent.

The company did not routinely inspect this vent to ensure that it was kept clear and, as a result, the vessel exploded.  No one was hurt. However, the explosion caused severe property damage.  This incident was investigated under Inspection #(REDACTED). The (REDACTED) Fire Department has informed OHSA of several calls on which surrounding neighbors have complained of a strong ammonia odor coming from the plant.  (REDACTED), Fire Chief, (REDACTED) Fire Department, stated that he believes the leaks might be coming from the safety relief  valves which have lifted on a couple of  occasions.

Employees Exposed to the Hazard: All of the 11 employees at the plant have exposure to the hazard.  An explosion could be catastrophic if people are in the area and an ammonia release could permeate throughout the plant and expose everyone.

Industry Recognition: It has long been recognized by the industry that ammonia system pressure vessels must be protected by safety valves.  It has also been long recognized that these valves require routine inspection and maintenance and that no more than five years should lapse between inspections.  ANSI/ ASHRAE Standard 15-2010, Safety Standard for Refrigeration Systems, Section 9.4.9 requires that the seats and discs of pressure-relief devices shall be constructed of suitable material to resist refrigerant corrosion or other chemicals action caused by the refrigerant.  Seats or discs of cast iron shall not be used.  Seats and discs shall be limited in distortion, by pressure or other cause, to a set pressure change of not more than 5% in a span of five years.

Employer Recognition: The employer was informed of the existence and some of the requirements of the ANSI/ ASHRAE Standard 15-2001, in 2005 when OSHA issue a hazard alert letter for non compliance of the ammonia refrigeration system.  In this version, replacement of the valves was required every five years.  This standard was withdrawn and replaced with Standard 15-2010.  The employer has neither inspected nor replaced the relief valves.

Common Sense Recognition: For a person with some knowledge about pressure vessels, it would have been common sense to ensure that valves were routinely inspected.  (REDACTED) was aware of the standard because he had been informed of some of the requirements of this standard as it applied to his refrigeration system.  The employer’s due diligence dictates that he should have consulted the standard to ensure complete compliance with the standard.

The Hazard was Causing or Likely to Cause Death or Serious Physical Harm: The hazard is the possibility of explosion of the pressure vessels on the anhydrous ammonia refrigeration system if the system cannot relieve over­pressurization due to inactive relief valves.  The explosion itself could cause fractures, lacerations, blunt-force trauma and death.  The subsequent release of ammonia could also cause severe chemical burns, severe respiratory damage and distress and death.

Feasible Methods by Which the Hazard May be Corrected: This hazard could be corrected by complying with the ANSI/ASHRAE Standard 15-2010, and having all relief valves inspected and/ or replaced.

I’ve seen most of the industry’s RAGAGEP required under 5(a)(1) by now. Here are a few examples: 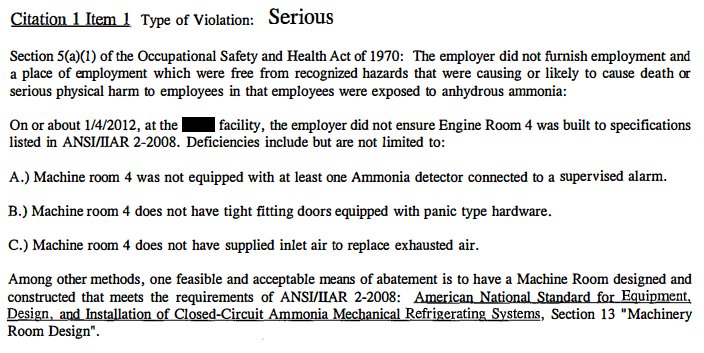 Finally, if you want to see why I suggest you implement PSM for Ammonia Refrigeration even if you aren’t required to, take a look at this citation: OSHA Link