“Without Standardization, there can be no improvement”

That’s one of my favorite phrases from Lean/Six Sigma. Is the person who is in charge of your ammonia system someone who genuinely cares about how your system is running? Are they the kind of employee who treats the system like they own it – or the kind of person who operates the system in the manner which causes the least effort on their part?

Let me tell you a quick story about a 16,000 pound ammonia system at an ice cream plant in Pennsylvania.

When I first started looking at this system in November of 2006, it was fairly obvious that nobody had bothered to optimize it’s operation – essentially as long as things were cold, it was “working.” The three condensers were rarely running at 100%, but the six ammonia compressors were running constantly and barely meeting the demand much of the time. Nobody had the inclination to look at how the system was operating, establish a baseline, and then modify the operating parameters for peak efficiency.

Working with the operator of the system we started dropping the head pressure setpoint manually depending on what the outside temperature was. What we were looking for was this: how low CAN the system head pressure run and still operate correctly?

Below is a graph I made from the system logs after our experiments: 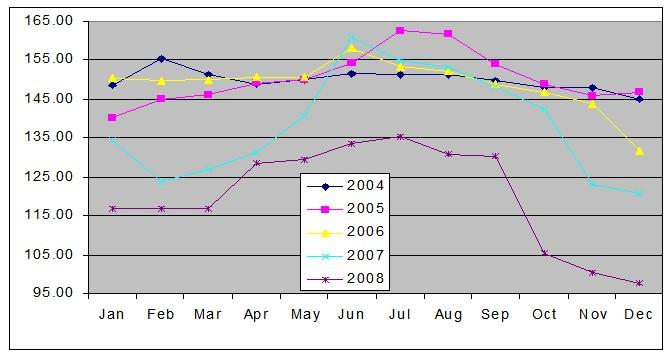 On the vertical axis is the average (logged every 5 minutes) head pressure for the month. You can see where we started manually lowering head pressure in 2007 based on the highest expected wet-bulb temperature every day. Unfortunately, this isn’t very effective when done manually because you aren’t there to lower the target head pressure when the wet bulb temperature drops in the evenings. In the fall of 2007 we added an automatic head pressure control.

Look at the results from 2008. That graph reflects a 357,184 kilowatt/hour or $26,800 savings between April and October. The cost of automating that floating head pressure? A little less than $500! End result:

There were many other issues as well like running 16″ of vacuum for a hardening freezer when it turns out operating at 10″ produced the same cooling effect. Another example at the same facility: the two Vogt p24 ice machines were on the low side suction when they intermediate suction was fully capable of handling the load. The cost to install a new suction line to these machines paid for itself via lower electrical costs in six months.

If you take one thing away from this, make it this: “A trained professional ammonia operator who genuinely cares about how well your system runs can save you twice his or her salary annually”

The opposite is true as well – you might hire someone at minimum wage to operate your system and end up paying twice their salary a year in excess operating costs.

2 Responses to Benefits of a Trained Professional Ammonia Operator