When does a Car-Seal program make sense for Industrial Ammonia Refrigeration systems?

First off: What is a Car-Seal program and what does it do?

Car-Sealing a valve OPEN or CLOSED is used ONLY if opening or closing that valve during normal operation could result in a Severe Safety Incident. Car-Sealed valves are usually designated on the P&ID’s as Car-Sealed OPEN (CSO) and Car-Sealed CLOSED (CSC), and are physically identified as Car-Sealed in its designated position / setting.

In order to more readily identify the location of the intended Car-Seals in the field, as well as the NORMALLY SAFE valve position / setting, the tags will be secured to the valve using COLOR CODED PLASTIC TIE STRAPS. 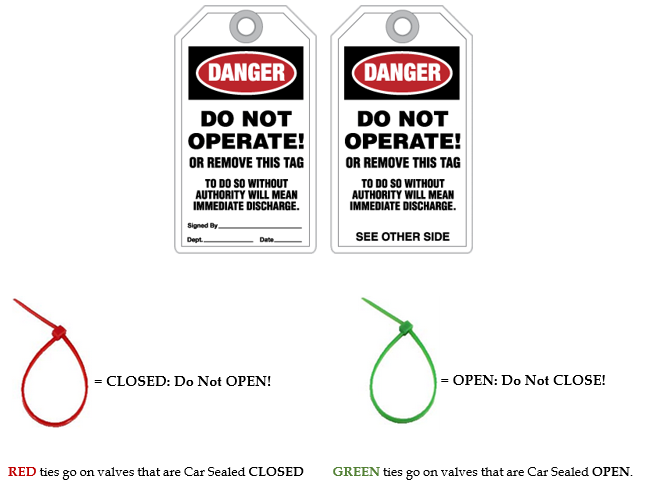 To put it bluntly: Car-Seals are placed on valves where REALLY bad things can happen if you move them from their normal (Safety Critical) position without taking precautions!

Where are they used in Industrial Ammonia Refrigeration Systems?

You should already have at least two Administrative Controls (safeguards) meant to minimize the hazard of opening and closing the wrong valves: Written SOPs and Trained Operators. The Car-Seal program is meant to add a third layer of protection on top of those two when changing the position of the valve could reasonably result in a Severe Safety Incident.

Severe Safety Incident – shall mean any incident which could result in any one or more of the following results:

While the decision as to which situations could reasonably result in a Severe Safety Incident are best left to the PHA team, the following are common situations where they have been used:

* A relief device in this case means a device to relieve excess pressure. While relief valves are common solutions, other examples include checkvalves, pressure-relieving regulators, EPCS solenoids, etc.